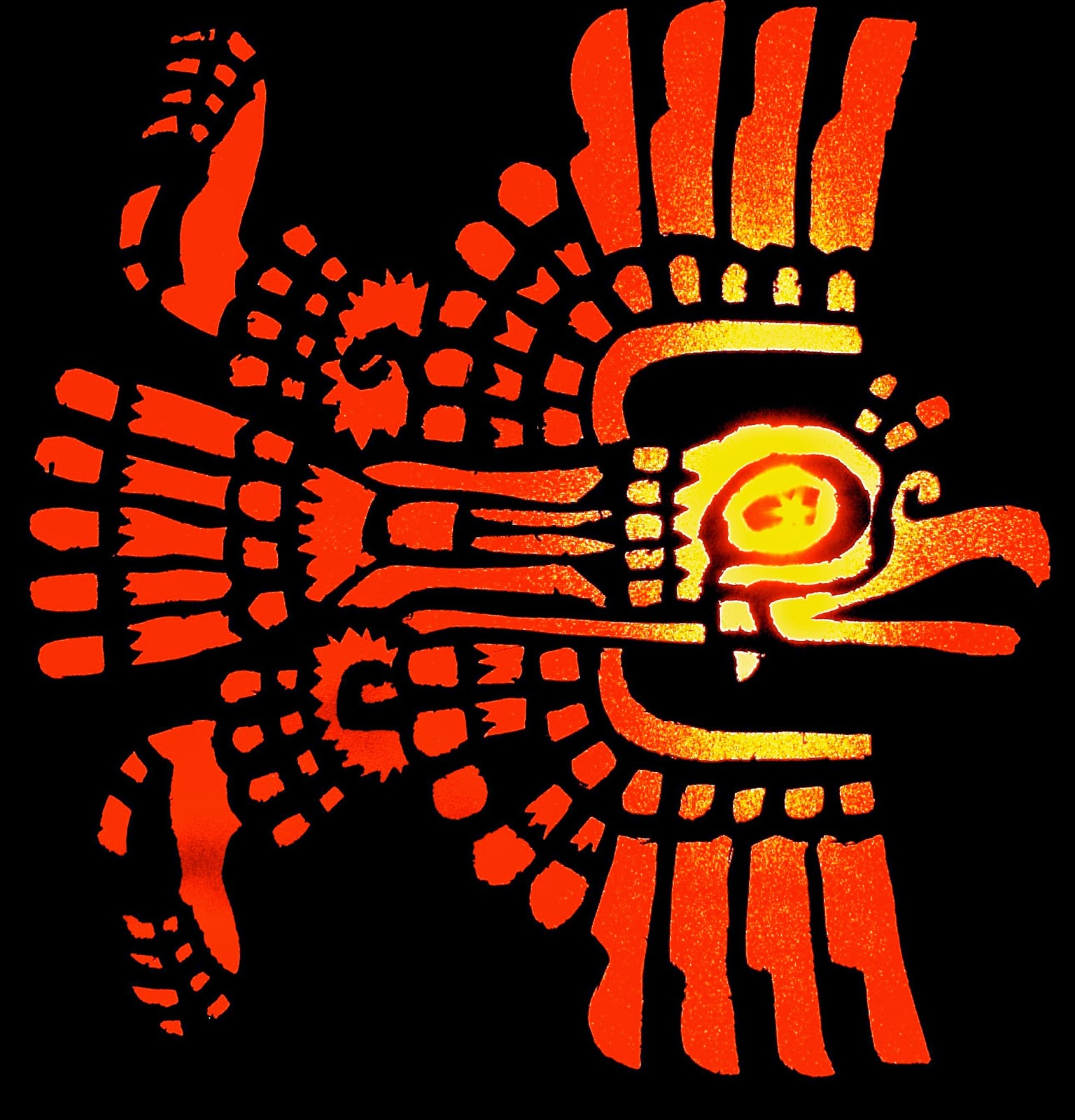 It is with great humanitarian concern and in absolute denunciation of the complicity and collusion of the of the US government with the pogrom of violence and impunity in Mexico that we now call once again for the US State Department and Department of Defense to immediately withhold all military assistance to the government of the Republic of Mexico as a consequence of the systematic and ongoing violations human rights, collusion and impunity which is prohibited by the Section 620M of the Foreign Assistance Act of 1961 (Leahy Amendment) as follows:

(a) IN GENERAL. – No assistance shall be furnished under this Act or the Arms Export Control Act to any unit of the security forces of a foreign country if the Secretary of State has credible information that such unit has committed a gross violation of human rights.

On November 20, 2014 the Human Rights Commission of the Comités de Defensa del Barrio delivered a petition to US Congressman Matt Salmon at his offices in Gilbert, Arizona requesting that Congressman Salmon provide the names and particulars of the 5 individuals trained by the US military involved in the Massacre of Tlatlaya, Mexico on June 30 where 22 youth were executed by the armed forces of the state of Mexico.  Congressman Salomon is Deputy Chief of the Western Hemisphere Sub Committee within the Foreign Relations Committee in the US Congress.  To date we have received no response. 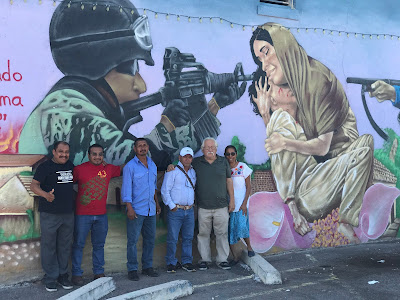 On December 19, 2014 the Human Rights Commission of the Comités de Defensa del Barrio hand delivered a communiqué to the office of the US Attorney John S. Leonardo, District of Arizona in Phoenix, AZ calling for appropriate investigation to corroborate the now public information which details how the federal government of Mexico, from the offices of the President to the Attorney General have criminally conspired and colluded to target the 43 disappeared students of Ayotzinapa under a regime of terror financed under the US Plan Merida and the so-called War on Drugs.

In our letter to US Attorney Leonardo, we specifically call for clarification of the issues of Human Rights violations being committed by of the State of Mexico with impunity and deliberate obstruction before the Inter-American Commission on Human Rights.  We now restate this fundamental demand for respect of the Rule of Law and comprehensive transparent investigation of the events leading up to the attack on the Ayotzinapa students on September 26th, as well as subsequent actions by agents of the state and their networks of accomplices. 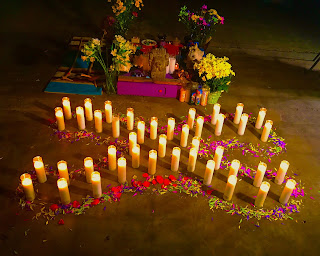 We have become informed that on November 18th, 2014 the Inter-American Commission on Human Rights entered into agreement with the Government of Mexico and representatives of the 43 Disappeared Students of Ayotzinapa which will allow for an Interdisciplinary Group of technical experts to work collaboratively towards the locating of the disappeared students, punishment for the responsible parties, and assistance for their families. Our understanding is that the essential aim of the agreement is to resolve the underlying structural problems in Mexico regarding forced disappearances, which are not limited to students of Iguala. 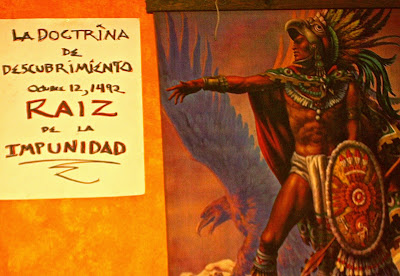 For this reason we have submitted a formal Petition for Review before the Interdisciplinary Group that the issue of Complicity and Collusion by the US government's policies, training and funding of the operatives of the narco-state in Mexico be brought to light comprehensively, and the cause of justice be served. 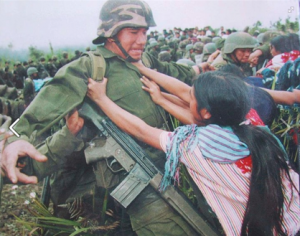 We call upon the US Department of State Bureau of Democracy, Human Rights, and Labor to take immediate and appropriate steps to confront the COMPLICITY and COLLUSION of the US government in the ongoing Crimes against Humanity by the State of Mexico in violation of fundamental Human Rights established under the Universal Declaration of Human Rights to which the United States is a signatory.

We call for the United Nations Human Rights Committee, and the UN Committee for the Elimination of Racial Discrimination (CERD) to review, evaluate and denounce the blatant collusion among the US and Mexican government as here presented for being an egregious systemic violation of Human Rights that merits specific consideration at the next appropriate session of the CERD in periodic review of the policies and practices of the US and Mexican governments. 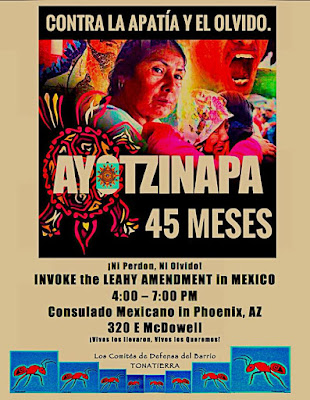 We demand and end to the impunity afforded to the state of Mexico by US State Department policies and an embargo of the armaments originating from US for the bloodbath that has resulted in over 26,000 disappeared and 100,000 deaths across Mexico under the guise of the US funded War on Drugs. 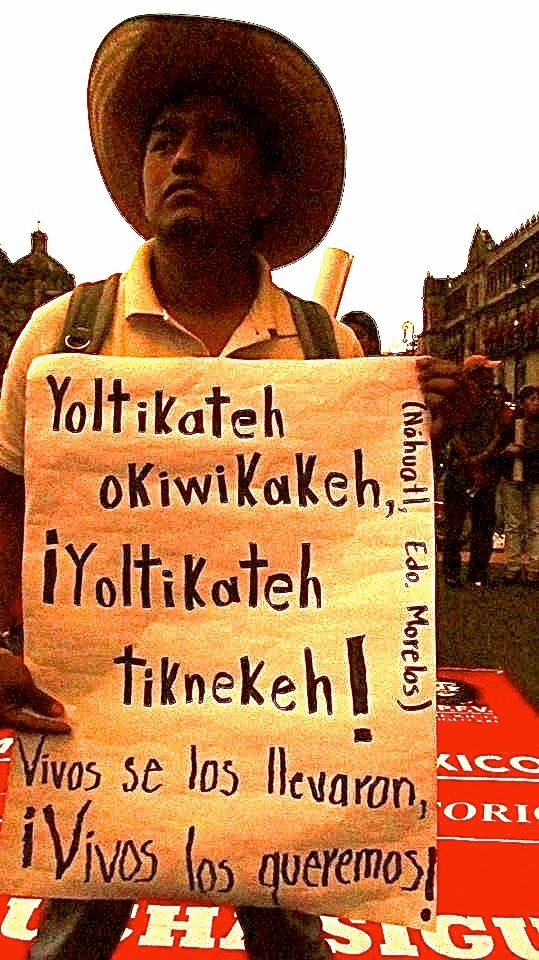 Posted by chantlaca at 9:41 AM