Statement of the Keeper of the Hopi Fire Clan Tablets 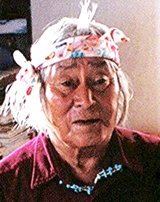 
Today the American people are being taught how it feels to be held hostage. That is how we have felt, having been held hostage up to the present day. In truth, everyone in that army is held hostage by the Government. Young people who want to live a long life are forced to suffer in the Arabian desert. We know that they are about to be burnt up in a war if they don't stop. It's up to the President to recall the troops he has sent to the Middle East. They must all be allowed to refuse this fate and return home. It is especially urgent that all native people who have become involved come home right away.
Current education of the Hopi into modern ways is a continuation of the policy of forced acculturation that began when our children were first kidnapped and forced into schools. The attempt to convert the schools so as to promote Hopi culture damages Hopi culture even further. Instead of dancing at the right time of year in the plaza, the Hopi children are taught to do their dances in school, outside the natural cycle, ignorant of their significance, and without the traditional preparation by the whole family.
This disturbs the very harmony these dances meant to maintain. Prior to such interference, our community life was held together by the relationship between the religious societies, each composed of a careful balance of the special qualities of each clan, dancing together with the cycles of nature. The disruption of this pattern accounts for the epidemic of delinquency and crime we witness today.

We hope that what we are asking will be brought about soon, and that those who sincerely wish to resolve this great crisis will make use of our knowledge. 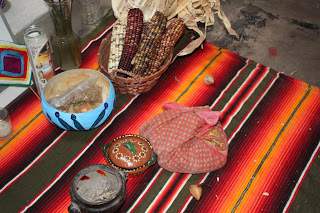 There were stars
before the sky was turned black by war guns
of alien armies who wished to put flame to
the land, searing scars of inhumanity and greed.
The echoes still roar
hollow eyed sockets
of false reality still see those rockets,
scorching the earth with titles
of manifest destiny, against
whom
they stood,
they who are we
Indigenous Peoples
understood.
The stars will
return in the sky.
Tupac Enrique Acosta
Huehuecoyotl
*******
Tlazolli
The concept of title in relation to land is a mythological construct, in which the world view of cultural identity is embedded and perpetuated across generations.
The simple reason is of course that the land is eminence itself, preexisting and outlasting any human society.  The relationship with the land, with the material world which emerges from the land, is then defined and evidenced by the traditional systems of inheritance and identity which perpetuate these teachings to the generations of the future. This is universal for all societies, but it is the traditional Indigenous Peoples from around the globe that create identity by ecological relationships to the constellations of families, mountains, rivers, deserts, nations, oceans and stars that define our homelands in the universe.
The societies of the European-American settlers do not.
The present systems of the United States and other governments states of the hemisphere which derive their justifications for jurisdiction over the land on the Divine Right of Kings to Dominion over the Earth and its Peoples, is pure myth.  Or better said, it is false myth -- a dead story with no teaching to teach but only a power grab to justify.
It cannot even hold coherence before the science of its own culture, now finally clarified that matter-energy are aspects of relationship to life, with automatic inflection by the world view of each clan, family, tribe, community, nation, and culture.
To claim ownership by land title today in view of the above is the equivalent of proclaiming that the world is flat. It is the position of a lost world, and a false reality.  It is an empire with no clothes.
Tupac Enrique Acosta
chantlaca@tonatierra.org
TONATIERRA
www.tonatierra.org 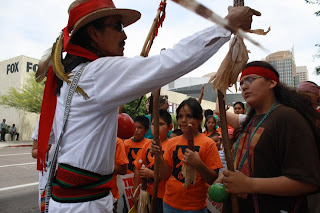 TLAZOLLI is the sacred weaving of elements, our tie to Tonantzin - Our Sacred Mother Earth -that connects Heaven:Earth like an umbilical cord weaving realities known as: Mexico. It is what the religions of the world call love and the scientists call gravity.